Population densities in Southwestern Ontario and the urban/rural divide

It's municipal budget season again, which brings a slew of reports and presentations related to short-term and long-term funding needs.

Earlier this week, Chatham-Kent council received a consultant's report comparing population densities among various Ontario municipalities. Population density can be a significant factor in municipal expenses and tax rates as low-density areas have to figure out how to provide services to a population spread out over a wider area.

The report showed Chatham-Kent at the bottom end of the density chart, completely dwarfed by every other municipality shown. I expect Chatham-Kent to have a low density, but having spent the last couple of years living and working in low-density areas, it wasn't clear to me that it was really that much of an outlier. 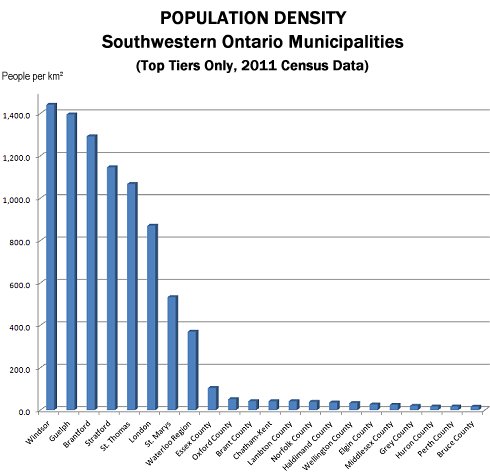 It turns out that it isn't. When you look at population density figures for all top-tier municipalities in Southwestern Ontario, Chatham-Kent's is comparable to that of surrounding small urban and rural areas (and higher than Middlesex County, where I live, although I live in a denser-than-average part). Whatever challenges come from low density, there are a lot of us in Southwestern Ontario in the same boat. Obviously, cities are more dense, but the graph really shows the urban/rural divide.

The cities of Kitchener and Waterloo aren't on the graph, since they're part of Waterloo Region. If they were, they'd take the top two spots. The City of Waterloo is hardly the densest place in the world, but it still has more than 35 times as many people per square kilometre as Chatham-Kent and more than 60 times as many as Middlesex County.

Low density is another of the challenges faced by small urban and rural Ontario that I hadn't been accustomed to, coming from Toronto and Waterloo. Although, having said that, looking at the graph it seems pretty clear that the magnitude of the challenge doesn't correlate (inversely) with the height of the bars.

(Statistics Canada population density numbers are essentially an average across a municipality. As with any averages, they have the potential to be misleading. For example, a municipality could cover a wide area but have most of its population packed into one or two small parts. That's often the case. There's typically a lot of intra-municipality deviation from the average. What Statistics Canada calls the "population centre" of London—which excludes much of the area near the 401—has nearly twice the density of what's shown above. The population centre of Chatham has more than 30 times the density of Chatham-Kent.)
- January 31, 2013