For university degrees in Ontario, Waterloo has two peers ...

When I looked at the National Household Survey numbers a few weeks ago and saw that 47% of the population of the City of Waterloo in the 25-64 age range had a university degree, I tweeted that this was a number that would be hard to beat. You aren't going to find many cities with a population just under 100,000 (using census numbers) and two universities, so it seemed like a number that other communities wouldn't be able to match.

It turns out that there are two other towns in Ontario that are right up there with Waterloo. Richmond Hill actually comes out slightly on top using the NHS figures (47.3% vs Waterloo's 46.8%), although I suspect that's within the sampling error. Oakville is also in the top group with 46.1% of its population with university degrees. There's then a noticable drop to Ottawa in fourth place (42.8%). 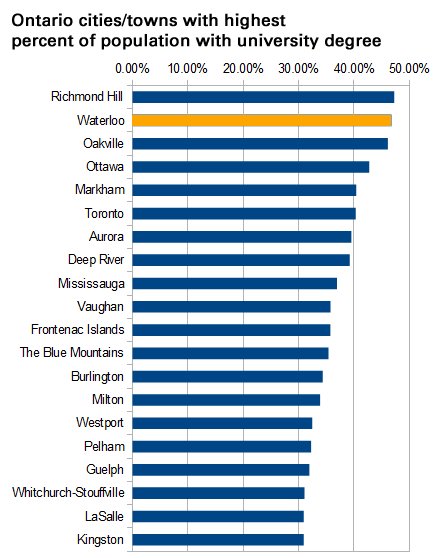 So, Waterloo is at the high end of the scale—and in an elite group—but a group with a couple of other members.

The Waterloo ranking is for the City of Waterloo. The numbers for Waterloo Region aren't as high, with Kitchener ranking 44th and Cambridge 116th in Ontario. London ranks 29th.
- August 08, 2013