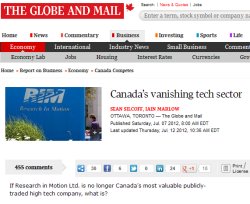 A story in the Globe a week-and-a-half ago headlined "Canada's vanishing tech sector" generated strong responses from two sources:
But while you could quibble with—and sometimes flatly refute—some of the claims in the story, it does point to a key issue that shouldn't be quickly dismissed. The essence of that point was captured in this line: "for the first time in at least a generation, Canada lacks a single, healthy large-capitalization tech champion."

Vanishing to the mainstream
The Canadian tech sector hasn't vanished, but it is fading from mainstream radar screens. And that could be a problem for the sector, especially when it comes to government policies and programs that have assisted so many startups over the last few years.

Those of us who work in and around the tech sector can be oblivious to the bubble we float in. If you want to come back down to Earth, just ask the average person who works outside of tech to name five Canadian tech companies. They'll (nearly) all know RIM and may know some local firms, but if they can come up with a few from outside of their own area they're doing very well.

That was true five years ago and 10 years ago as well. Not only have Nortel and RIM been the exceptions, they've also been, for a generation of Canadians, the company everyone knows in a category where they're aware that there are several other companies but don't really know much about them. The entire Canadian tech sector was immersed in the halo effect they generated.

The value of an icon
In Waterloo, we quickly learned the value of having the industry icon in our own backyard. Thanks to RIM, people were ready to believe that a lot more was going on in Waterloo than was really the case for many years. We put that belief to good use, attracting the resources needed to help the reality catch up to the belief. RIM actually contributed very little—directly—to the creation of Waterloo's startup community, but its indirect contributions were significant. Few startups in the Waterloo area haven't taken advantage of resources that came to the community partly as a result of the halo effect that RIM engendered.

But it's not just Waterloo. The near-simultaneous collapse of Nortel and rise of RIM couldn't have been timed better for psychological impact. We had the threat and the hope—the dire things that could happen and the proof that we could still create great, world-class tech companies. You couldn't ask for a more motivational combination.

Governments were particularly motivated. Over the last few years, hundreds of millions of dollars have been poured into the tech sector, through new programs and agencies like ONE, CECR, and FedDev and through additional funding for longstanding programs such as IRAP. Here in Ontario, we've also seen the federal and provincial governments kick in money to stimulate venture capital investment.

We've seen greatly expanded services from organizations like MaRS and Communitech, the creation of new innovation centres providing services to startups and early-stage tech companies in Hamilton, Guelph, Windsor and many other places, and funding for new commercialization centres in Waterloo, London, Hamilton, and elsewhere. It would be hard to find many tech startups in Ontario that haven't received some benefit from these programs—in many cases, the benefits have been substantial.

Did government really care about supporting a five-person startup? I think the bigger motivation was "finding the next RIM." Not that these startups were realistically ever going to be RIM-sized, but RIM was the mental model of what a Canadian tech startup could become and that legitimized the entire sector and the level of support it received.

There may be no "next RIM" for some time
When people ask who the next Canadian tech darling is going to be (and RIM has no plans to let go of that spot, although I think it's fair to say its grip has loosened), I'm not sure they realize what an exception RIM is.

Of the companies with Canadian headquarters listed on the TSX—most of which have reached a size that few of our tech startups will ever match—nearly 95% are from outside the technology sector (although the TSX also has separate categories for cleantech and life sciences firms which would lower that percentage if you use a broader definition of technology).

By market capitalization, the largest Canadian-based company in the category is IT services firm CGI, followed by RIM and OpenText. The next four—CAE, Constellation Software, MDA and Celestica—are all billion-dollar-plus companies ... and have a combined 54 followers on Twitter (30 for Celestica and 24 for CAE; couldn't find Twitter accounts for the other two).

As a business owner, I'd take market cap over Twitter followers too, but none of these huge companies will ever be the flagbearers that RIM has been. If they were going to be, they would have been by now.

At the other end of the scale, we have companies like Hootsuite with over three million Twitter followers and a top-200 Alexa ranking—outstanding numbers that have helped make the company a success story that Canada's startup tech community points to and is inspired by. But it has fewer than 250 employees—which is still bigger than FreshBooks and Shopify and other startup community favourites, but to a mainstream audience, that's not much at all. And for every company of that size, there are hundreds that will never grow to be the size FreshBooks is today.

Startup ecosystem fuelled by RIM halo needs to stand on its own
I don't look down my nose at 200-employee companies and neither does the startup community. In fact, we can get excited by companies with teams smaller than 30. But not everyone feels that way. There is increasingly a mood in Canada that we've been wasting too many resources on small startups that will never become large firms when what we should be focused on is supporting companies on a path to become billion-dollar businesses.

Some would say good riddance to government programs and handouts, but there's no denying that much of the startup ecosystem that has been developed over the last few years in Ontario has been driven by government policy and support. Those policy choices have also shaped private sector investment in the sector.

If the motivation to find the next RIM has started to fade, the task ahead is to explain to policymakers and Canadians in general why having a thousand microbusinesses that few people outside of our little enclave have ever heard of is a sign of a healthy industry that is worthy of support and investment.

I don't have stats to point to, but there seems to be more Canadian tech companies today than at any time in the 15 years I've been following the sector. The sector isn't vanishing—I know that, and you likely know that. But our neighbours probably don't, and the Globe story was a good reminder that mainstream perceptions in Canada may be very different from our experiences ... and that those perceptions could have significant consequences.
- July 18, 2012