Over the years I lived in the City of Waterloo, it always had a much younger population than the national or provincial average—something you'd expect in a city with two universities and a population of just 100,000 (even though students are counted in their "home" regions by the census).

That remained the case with the 2011 census, where Waterloo's median age was 37.6 compared to the Ontario median of 40.4—and where Waterloo had 16.4% of its population in their 20s, the largest number among the 11 communities I looked at and well above the provincial average of 13.0%.

But once you break down the numbers a little more, Waterloo's youthfulness definitely faded between the 2006 and 2011 censuses.

Its median age was up from 35.4 in 2006 and Waterloo showed a decline in every one of the nine age categories under 45 with the exception of 15-19, where it essentially remained flat.

Of the 11 communities I looked at, it was one of only three that showed a drop in its number of 20-somethings (Windsor and Chatham-Kent were the other two). It's easier to show a decline when your population is skewed toward people in their 20s, but Waterloo also showed a huge decline in population among people in their 30s—with Windsor and Chatham-Kent again the only two with bigger drops. 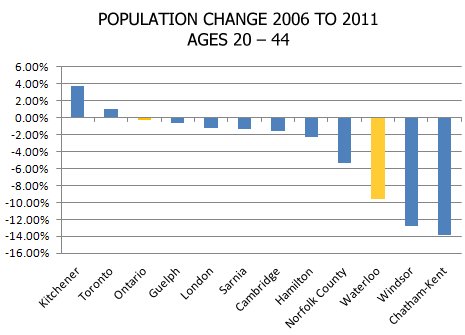 The leader in all three categories? The City of Kitchener. It may go against the traditional image, but as of the 2011 census, Kitchener had become a (slightly) younger city than Waterloo, with a median age of 37.2, and with huge gains in its population between 20 and 34 years old between 2006 and 2011.

Kitchener was the only one of the 11 communities to show an increase in 30-somethings and its 10.3% increase in population in their 20s blew away all other areas, as well as the provincial average of 8.2%

So Kitchener is now the youngest city in Waterloo Region.

If it's any consolation to Waterloo, Cambridge still has nearly five months on you.
- July 05, 2012