The Public Accounts of Ontario for fiscal year 2012 (ended March 31) have been released, showing—among other things—the transfer payments made by the Ontario government to various organizations though the year.

Some highlights from the commercialization/innovation sector: 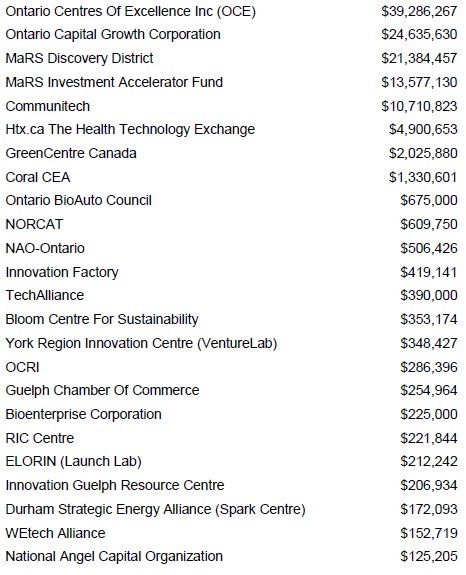 Some of these dollars are passed through to other organizations, but that level of detail isn't provided. Many of these organizations receive other Ontario government funds, but these are the direct transfer payments recorded in the public accounts. Several of these fundings were through the Ontario Network of Excellence (ONE) program, which has about another 10 months to go under existing contracts.

Overall, the top recipients as shown in the public accounts for the research and commercialization sector were the Ontario Institute For Cancer Research ($82.1 million), Hospital For Sick Children ($49.6 million) and the University Of Toronto ($42.6 million). OCE was fourth.