I've used government disclosure statements as the basis of reports for years, but I still get a little uneasy when I do. They're almost never as clear or detailed as you'd wish, and can be a minefield for the unsuspecting. 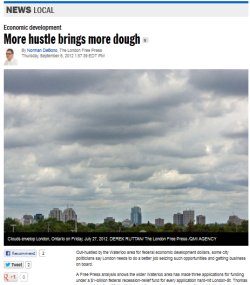 A story last week in the London Free Press (a follow up on an earlier story I hadn't seen) compares contributions made by FedDev in the Waterloo and London areas—a story based on FedDev disclosure statements over the years.

On the one hand, it concludes that Waterloo Region is more aggressive about pursuing government funding than the London area, and that's been my experience as well—specifically, in the tech sector.

But the story manages to fall into some of the traps that await readers of disclosure statements. And in so doing, I think it misses the interesting story that the FedDev numbers point to—one that's a bit concerning from a London perspective (which I'll save for another time, since my blog posts are usually way too long).

The Free Press reported that Waterloo has received $87.4 million from FedDev compared to $37 million for London. Looking through the numbers, though, I'd say both of those figures are misleading. The actual gap seems closer to $5 million than $50 million.

Using that line as an example, you'd probably conclude that Brantford got $12 million and no other area received anything. In fact, very little of that $12 million will end up in Brantford. It's for a fund, now called SOFII, to help companies across Western Ontario—including all of Southwestern Ontario from Windsor to Guelph and beyond. But FedDev disclosures are listed with just a single municipality or community, and, in this case, since Enterprise Brant was the administrative lead on the WOCFDCA proposal, Brantford is that city. You can't always go by the municipality that's listed—sometimes you have to dig deeper, and that's usually not easy.

When you look for contributions for London, and don't know what to look for, you're going to skip right by this one:

It says Mississauga—and the Free Press didn't include it in the local numbers. But it's actually the largest contribution that FedDev has made to London—funding for the new Dr. Oetker facility in the city. (LEDC's Peter White is quoted talking about it, but it still wasn't included in the London tally.) Dr. Oetker Canada has its HQ in Mississauga, so that's what's in the disclosure, even though the money is being used for London's benefit.

The largest FedDev contribution assigned to Waterloo Region—by far—was this one from just over a year ago. It's nearly four times the size of the next largest contribution in the area:

Again, if you don't know what you're looking at and don't have time to look into it, you'd think the City of Waterloo got $19.6 million from FedDev. But it really didn't. That's actually FedDev's contribution to the Southern Ontario Water Consortium, announced at last year's AMO conference. London is also a node in that network, as are Toronto and Guelph. The money is actually going to all those areas, but only Waterloo is shown in the disclosure.

There are other tricks and traps in analyzing the disclosure statements (projects get cancelled, dollar amounts get changed and the revisions can look like new fundings), but the one likely to create the biggest errors is allocating all the dollars to the municipality in the disclosure. It would make analysis much simpler if you could do it that way—a quick copy, paste, and sort—but accurate results require more work than that.

So, if we call the Water Consortium funding a push and take it out of the calculations (how much is going to each node has never been disclosed, so we don't know how to divide the pot), I'm left with $54.5 million in disclosed FedDev contributions to organizations in Waterloo Region. Add the Dr. Oetker $10 million to the totals for the London area and I get $50.3 million ... and then you'd need to add millions more to each for the Water Consortium and funding for SOFII and anything else allocated to other areas in the disclosure statements but actually used for the benefit of London and Waterloo Region, minus amounts shown for those two regions that are actually being used elsewhere.

We don't know what those are, so we can't do the calculations. I'm not sold on the value of comparisons of the aggregates in this way—and I never feel very confident drawing conclusions from disclosure statements—but the difference in FedDev funding between Waterloo Region and London doesn't look to be anything close to $50 million.

In fact, the real gap looks narrow enough that you might not think there's any message to take away from the difference. But I think that would be a mistake too ...
- September 10, 2012