One of my pet peeves over the last few years has been over-reliance on "macro" analyses, or as I call them, "people sitting in their offices playing around with spreadsheets crunching aggregated numbers downloaded from StatsCan and other sources with almost no understanding of the underlying components and drivers of those numbers and jumping to "conclusions" which say almost nothing that would be of any use in effecting change." I guess "macro" is a handier name. Just about all of the studies relating to productivity in Canada/Ontario fall into that category, and I've been happy to see lately that others are starting to express the same frustrations (Drummond Report, for example).

None of that stopped me recently from grabbing a bunch of census data from StatsCan and building my own spreadsheets, with the hope that the numbers might raise questions about how to support innovation in small urban and rural areas, particularly in Southwestern Ontario.

The numbers I've used are all from the 2006 census, which means they're about as stale as census numbers get. Comparable 2011 census numbers will be released soon, and we'll be able to look for any significant changes when that data comes out. The areas I selected are somewhat idiosyncratic—I included Strathroy-Caradoc because that's where I live (part of Middlesex County) and the City of Waterloo because 1) that's where I used to live and 2) one of my questions is how much we can expect approaches that worked for us in the City of Waterloo can be applicable to other areas.

I'll split this into a couple of posts and start with education and age.

EDUCATION
I included the numbers for university graduates in my last post, but I'll put them here again along with the numbers for the percentage of the population age 25-64 who don't have a high school diploma. 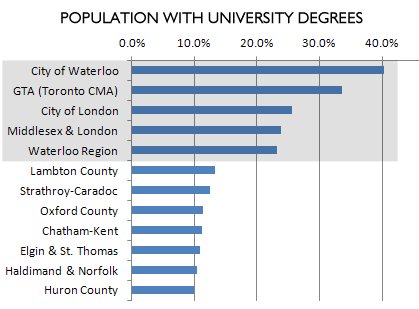 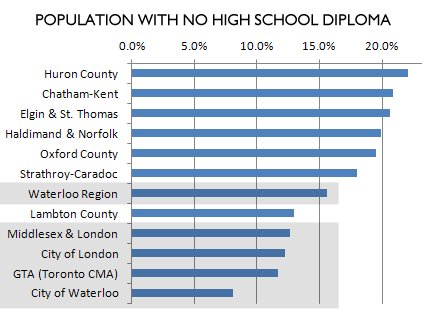 Not surprisingly, the "no diploma" rankings are pretty much the reverse of the university degree numbers, with the larger urban areas at the bottom of the list. Lambton County—home of Lambton College—also scores pretty well, and then the numbers for the other rural areas jump to the 20% range. That means there are nearly twice as many people in those areas without high school diplomas as there are with university degrees. The City of Waterloo is weighted about 5-to-1 in the opposite direction.

Some questions that come to mind in looking at this data: 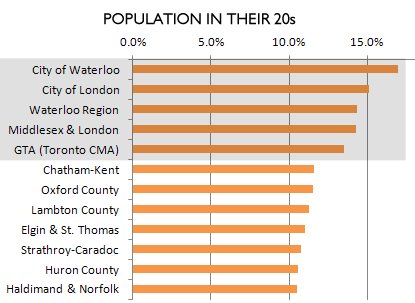 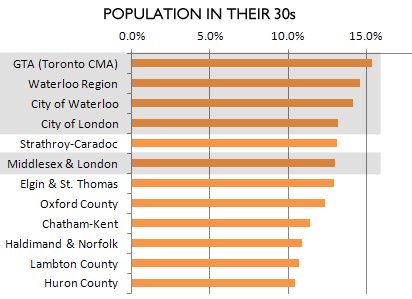 Here again, larger urban areas (or areas than include a large urban centre) are grouped together on the top of the lists with the rural/small urban areas on the bottom. The drop-off isn't as dramatic as it is with education, although there's a notable ledge in the 20s list between big urban and small urban (between the Toronto CMA and Chatham-Kent).

Youth out-migration is a big challenge for most small urban and rural areas. They know that a lot of young residents will leave the area—at least in the short term—once they're ready to go to university or college, or in many cases just to get a job. Lambton County has a college, but that wasn't enough to stop it from landing in the bottom half of both lists and near the bottom in thirtysomethings.

The City of Waterloo scores highly with both age groups, particularly with residents in their 20s, and its advantage there is probably understated since many students who spend most of the year in Waterloo would be counted in their "home" areas for the census.

London doesn't quite match Waterloo's numbers, but it's a very strong second with twentysomethings. Waterloo is ahead of London in encouraging and supporting youth entrepreneurship—certainly tech entrepreneurship—which is why I was excited when BizInc started. Not only is it needed in the community, it needs to be expanded.

We know that entrepreneurs and innovators come in all ages and there are different advantages and disadvantages to starting a company at any stage in life. We had a lot of success in Waterloo from reaching out to young entrepreneurs ... but in an inclusive way where they would also interact with entrepreneurs outside their age group. (I used to say that if I look around the room and just see a bunch of old guys, that's a red flag, but if I don't see ANY older people, that's not good either. Since I first said that, I've switched from one group to the other and am happy to find I still feel the same way.)

It's essential for the communities near the top of the lists to make sure they ensure that young entrepreneurs and innovators are encouraged and supported. But it's not just those areas. It's important in the battle against youth out-migration. It's not only younger people who don't want to be working for a company doing what it's always done in a way that it could have been doing it in 1995—or even 2005—but my experience is that dissatisfaction with complacency is highest among the younger crowd.

We've come a long way from the traditional image of entrepreneurs as old guys in suits, but it still exists and seems to be more persistent in regions with older populations. It sometimes feels like more resources are used in futile attempts to get established business to move to an area than in supporting new entrepreneurs. I the message here isn't to focus on the age range where your area is strongest, but to ensure that all ages feel included.

Continues with: More census crunching: Income and housing expenses in Southwestern Ontario. Also see Adapting innovation programs to small urban and rural areas, the first post in this series.
- May 22, 2012