One last look at some census numbers for selected Southwestern Ontario regions (selected because—other than Waterloo—they comprised the area I was covering for the Ministry of Research and Innovation's Ontario Network of Excellence (ONE) program), this time looking at immigrants and visible minorities and the concentration of each across these regions.

Much has been written about the vital role of immigrant entrepreneurs—particularly in Silicon Valley (for example, Vivek Wadhwa's "How the Indians Conquered Silicon Valley"). Within Southwestern Ontario, you'll find many regions looking to be more attractive to immigrants as part of an economic development strategy—in Chatham-Kent, for example, where it was mentioned just last week by mayor Randy Hope is his annual state-of-the-municipality-style adddress.

EcDev guru Richard Florida and his enthusiasts have been high profile proponents of the idea that the level of immigrants and visible minorities are either a component of or a proxy measure for tolerance and openness to diversity, which they believe are key drivers of the vitality and economic prospects of a region.

Being Toronto-born and raised, this was one where I wasn't expecting to see impressive scores in Southwestern Ontario and certainly not from Waterloo. More than a couple of times over the years, I had people from Toronto come to Waterloo for meetings and remark in hushed tones on the apparent lack of diversity in the city (once you're off the UW campus, anyway). Coming from Toronto, it's hard to miss.

And no area I looked at in Southwestern Ontario comes close to matching the GTA (actually, the Toronto CMA which is most of the GTA) for immigrants and visible minorities, but that much was a given. What was suprising to me was how well Waterloo scored relative to every other area. 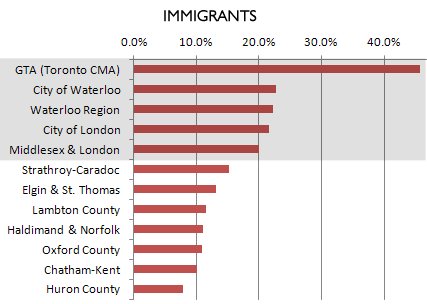 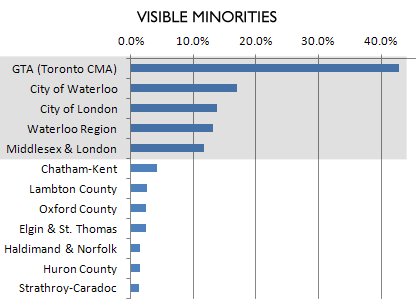 It's no surprise that the large urban areas and their regions are all at the top of the lists and there's a chasm between them and the small urban and rural regions. Among these Southwestern Ontario regions, Waterloo is a clear leader in both immigrants and visible minorities, with London coming not far behind in immigrants.

When you look at recent immigrants (people who have immigrated in the last five years), Waterloo scores very well, even making up some ground on the Toronto area—the only region I looked at that did so. 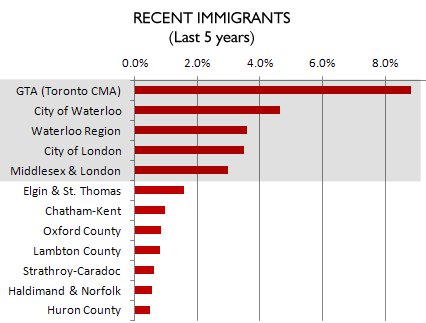 If immigrants are a key component of building an entrepreneurial base and culture, then the small urban and rural areas are clearly at a major disadvantage. Waterloo, on the other hand—at least by Southwestern Ontario standards—is a downright mosaic. Would never have guesssed that two years ago.

This is continued from: "More census crunching: Income and housing expenses in Southwestern Ontario" and "Education and age differences across Southwestern Ontario and implications for 'innovation' support." Also see "Adapting innovation programs to small urban and rural areas," the first post in this series.
- May 29, 2012