A couple of more items from my round of census crunching. The last post discussed age and education, and this time I'll look at income and housing expenses. I'm not sure this has much effect on innovation support programs, but I found it interesting. It also reveals one other dimension in which the City of Waterloo is a clear outlier (along with being off-the-charts in university education and in the presence of residents in their 20s).

The median income for "married-couple families" (which I selected from the many different income categories only because it's one I fall into) shows a ranking that probably doesn't come as much of a surprise, with the large urban areas—or regions including large urban areas—all grouped together at the high end of the range: 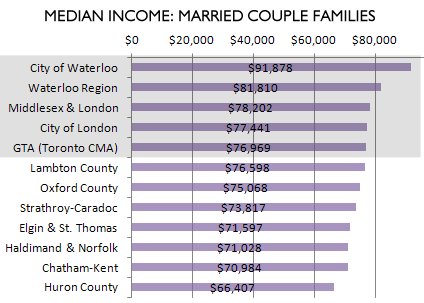 But while the order didn't surprise me, there were a couple things I hadn't expected. The first was just how much of an outlier the City of Waterloo is for income. It's not just ahead of the pack, it's way out in front. (And remember these are median incomes, not averages, so half would come in above this number and half below.) Waterloo is about 20% above the provincial median and nearly that much above the City of London and the Toronto CMA. That's a much bigger gap than I would have guessed.

The other thing I found interesting was—Waterloo aside—how little difference there was between all the other areas, with the exception of Huron County which is clearly trailing the pack. Every other region shows a median income in this category between $71K and $78K, and that includes everything from the Toronto CMA and London to the small urban and rural counties. Lambton County median income was just barely below that of the Toronto area. (I wouldn't read into this that particular jobs aren't higher paying in Toronto, because I think they definitely are, but this is balanced by more lower paying jobs so that the median is about the same).

The census numbers for median mortgage and rent payments (technically, it's "payments for owner-occupied dwellings" and "payments for rented dwellings") are about what you'd expect as well, again with the large urban areas together on the high end and Toronto being clearly the most expensive: 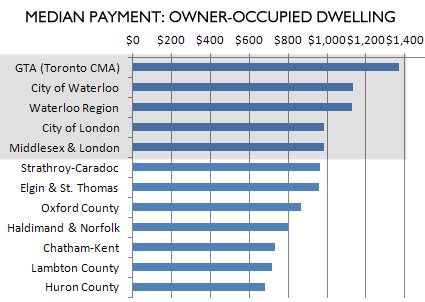 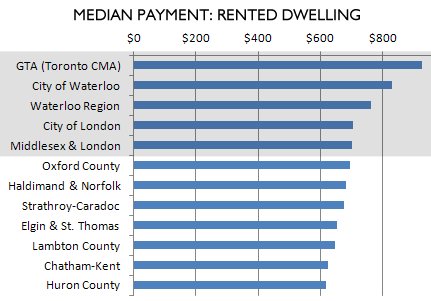 One final number that surprised me: when you look at the median income of "all private households"—much broader than married couple families—the City of London falls to near the bottom of the list, while the other urban areas remain together at the top: 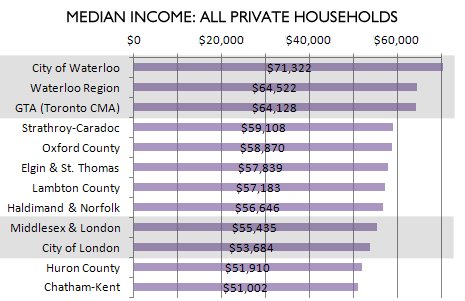 Not sure what to make of that one. (The City of London scores very highly in the percentage of dwellings that are rented—way higher than all the others, even the Toronto CMA—so the explanation is probably that there are more people with income below the median who are living on their own—or even with others, with a combined income below the median. This could be an example where the stats look negative but the underlying reality isn't bad.)

One more to come on immigration and visible minorities, then back to innovation and entrepreneurship.